Diagnosed at 17: Here's my story

Around the 8th grade, just before finishing junior high, I began to see red specs in the toilet after I'd go "number two." I assumed it was no big deal, and I even reasoned with myself.

"Maybe it's ketchup. Or Twizzlers. Or tomatoes," I hoped.

I put myself on a "no red foods" diet and expected my problem to go away. It did—at first. But then, the red came back. Yet I stayed silent.

As a volleyball player who barely walked onto the court because of the tight, spandex shorts, I was embarassed about my body. Mortified, actually. The last thing I needed was people knowing what I saw when I pooped. So I kept it secret for a really long time. 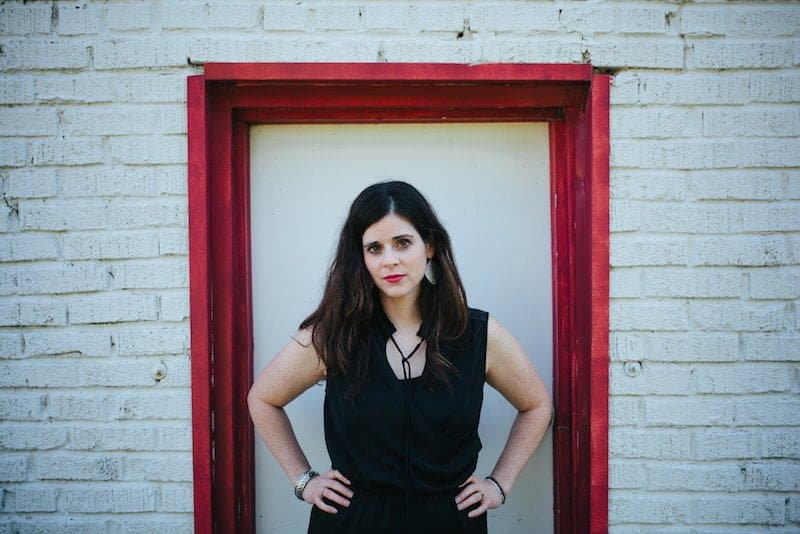 It must be hemorrhoids

Eventually, I accepted that the red specs I kept seeing were blood in my stool. Yet they kept changing. One day, they'd be bright red, yet other days, they'd look darker in color. Finally, I broke down and decided to ask for help. A blushing high schooler, I confided in my mom about the blood and she looked it up online.

This was 2001, the Internet was new. The websites we found indicated it must be hemorrhoids.

Other causes of blood in the stool were mentioned, but indicators of serious conditions that only happened to older people—like Grandma and Grandpa.

“What a relief,” I thought to myself as I oddly enough, joyfully, assumed I had some 'roids.

From red to black

The blood kept coming and got to the point it was odd if I'd go poop and not see it. But one day, I began seeing more than usual, it had gone from bright red to dark red and black. Severe stomach pains came next, and overall fatigue. I confided in my boyfriend, Mike, "I think I need to see a doctor" but wouldn't tell him what was wrong. He began pester me. 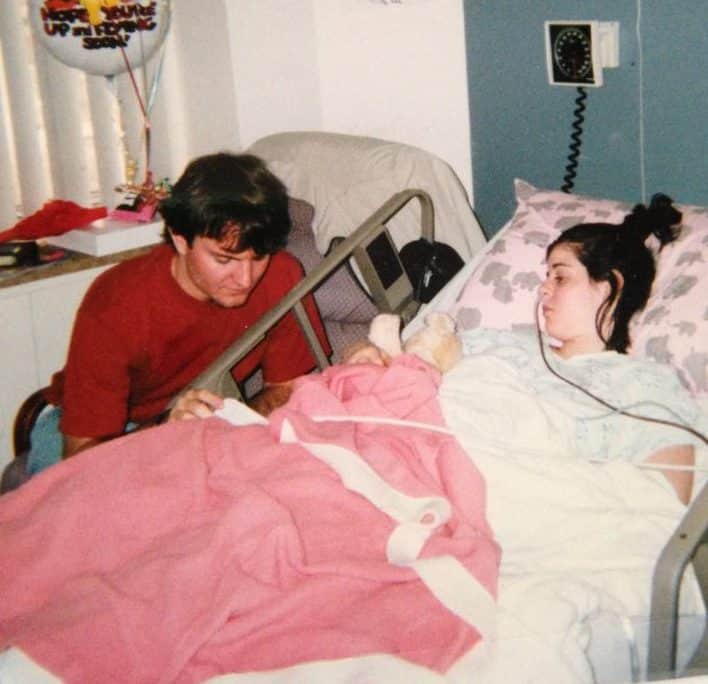 You can get colon cancer at 17?

One day, my mom overheard Mike's insistance for me to see a doctor and realized my "little red problem" never went away. By this time, I'd seen blood in the stool for many years. Once my dad found out, a whirlwind of getting rushed to a gastroenterologist, and into a colonoscopy, soon followed. Nobody expected the source of my bleeding to be a tumor—stage 3 colon cancer.

Especially because I'd just turned 17.

“You are SO young - we’ve never seen colon cancer in a teenager,” said many doctors and nurses as they'd walk into exam rooms. I felt like a unicorn in the oncology ward.

I eventually started treatment, FOLFIRI, because doctors wanted to, "hit it hard." I’d never been so sick; it was worse than the flu. I puked for days after the infusions. My mouth hurt, and I could taste medicine in my spit. I began radiation, too, since my tumor was at the junction of the colon and rectum. This was no cake walk either.

I found it strange to lie on a table while a big, thick door with “danger” symbols all over it closed. I found it challenging to balance both life as a teenager and a cancer patient. I didn't fully realize that my life was on the line. Colon cancer didn’t happen to many 17 year olds, yet it happened to me. I was tired, sunburned, skinny and weak. Yet, full of faith, I also believed God could use my illness to spice up my testimony.

The hope of “normal” life's return kept me going, as well as ignorant bliss and young love. Although my health had tanked, my love life was going strong. Despite the setbacks during treatment, I did make it to junior prom.

After six months of treatment, and two major surgeries, I was done. I walked away from cancer, declared "no evidence of disease," and a few weeks later, I returned to school for my senior year of high school. Cancer was a fluke of my past, or so I thought. 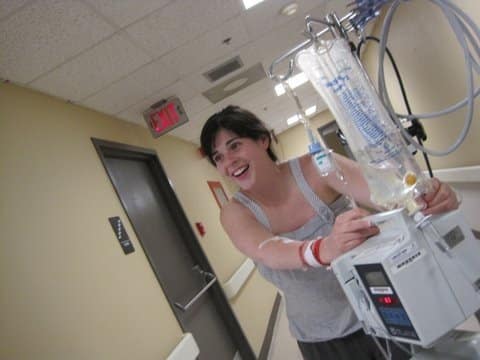 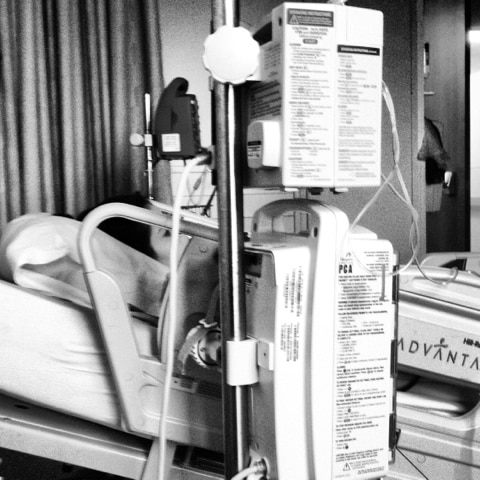 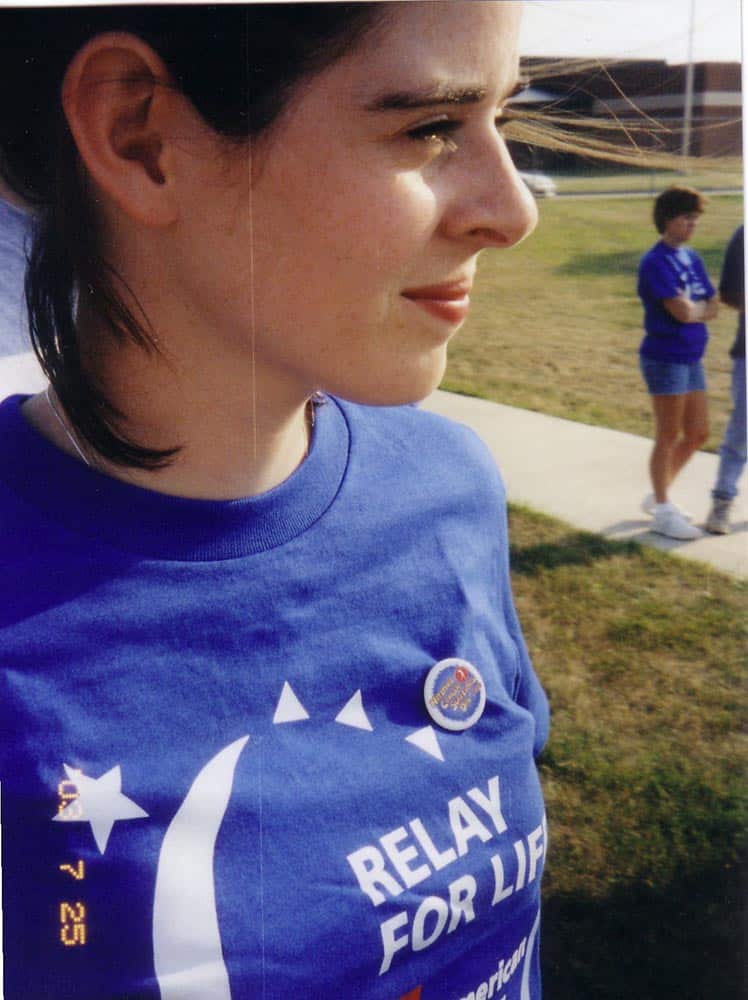 With cancer behind me, I focused on life ahead. High school graduation, college, new friends and a wedding—it was why I'd fought to live. Five years after we first started dating, the guy who insisted I see a doctor slipped a ring on my finger as we both said, "I do." With cancer behind us, we were over "in sickness" and so ready for "in health."

But one day after a routine colonoscopy, I woke up to familar stares and concerns. Adenomas polyps... one especially looked concerning. A bold recommendation by my gastroenterologist sent me into another colon surgery. None of us expected pathology reports to show stage 1 colon cancer... I was diagnosed again. At age 25, I became a two-time colon cancer survivor. Ouch.

Surviving cancer once was hard enough, but facing it a second time brought new fear and anxiety. It made me doubt and question God. It put a strain on my marriage. I resented my body for turning against me. I lost my identity. Here's a video where I talk about this:

To cope, I began counseling. I started blogging, Semicolon Stories. Eventually, I embraced patient advocacy. Over time, my body, heart and soul began to heal.

Healing looked like modeling for the Colon Club's 2009 Colondar. As I got involved in the community, I connected with Fight Colorectal Cancer (Fight CRC). Flabbergasted, they offered me my dream job, Communications Director. As I criss-crossed the country telling my story, and the stories of many others, it gave my experience so much meaning. After five years, I slowed down and returned to freelancing, but I continue to advocate and proudly serve as the Editor in Chief of Beyond Blue, Fight CRC's patient magazine. 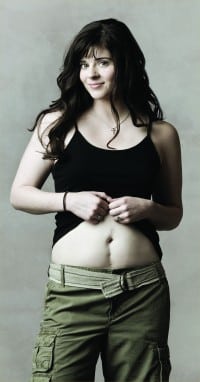 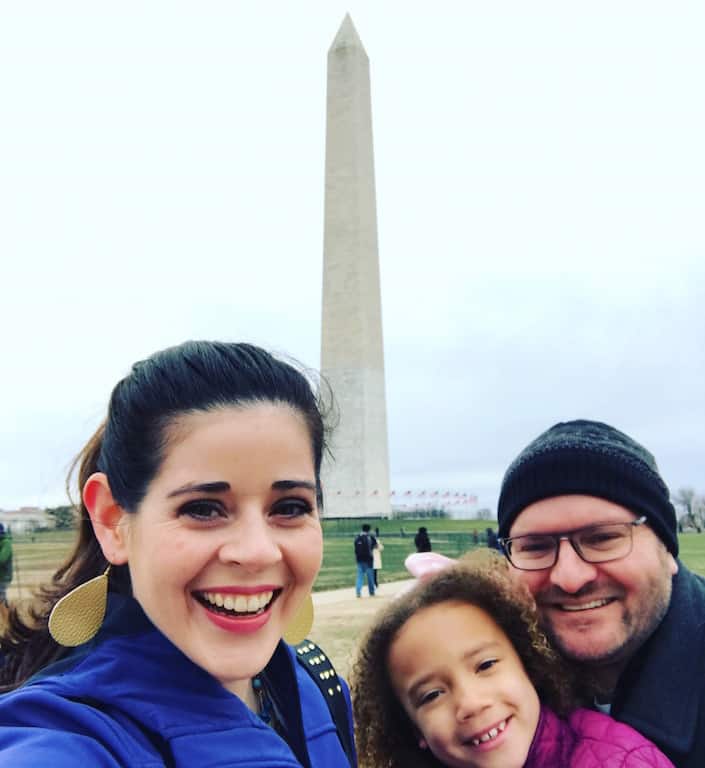 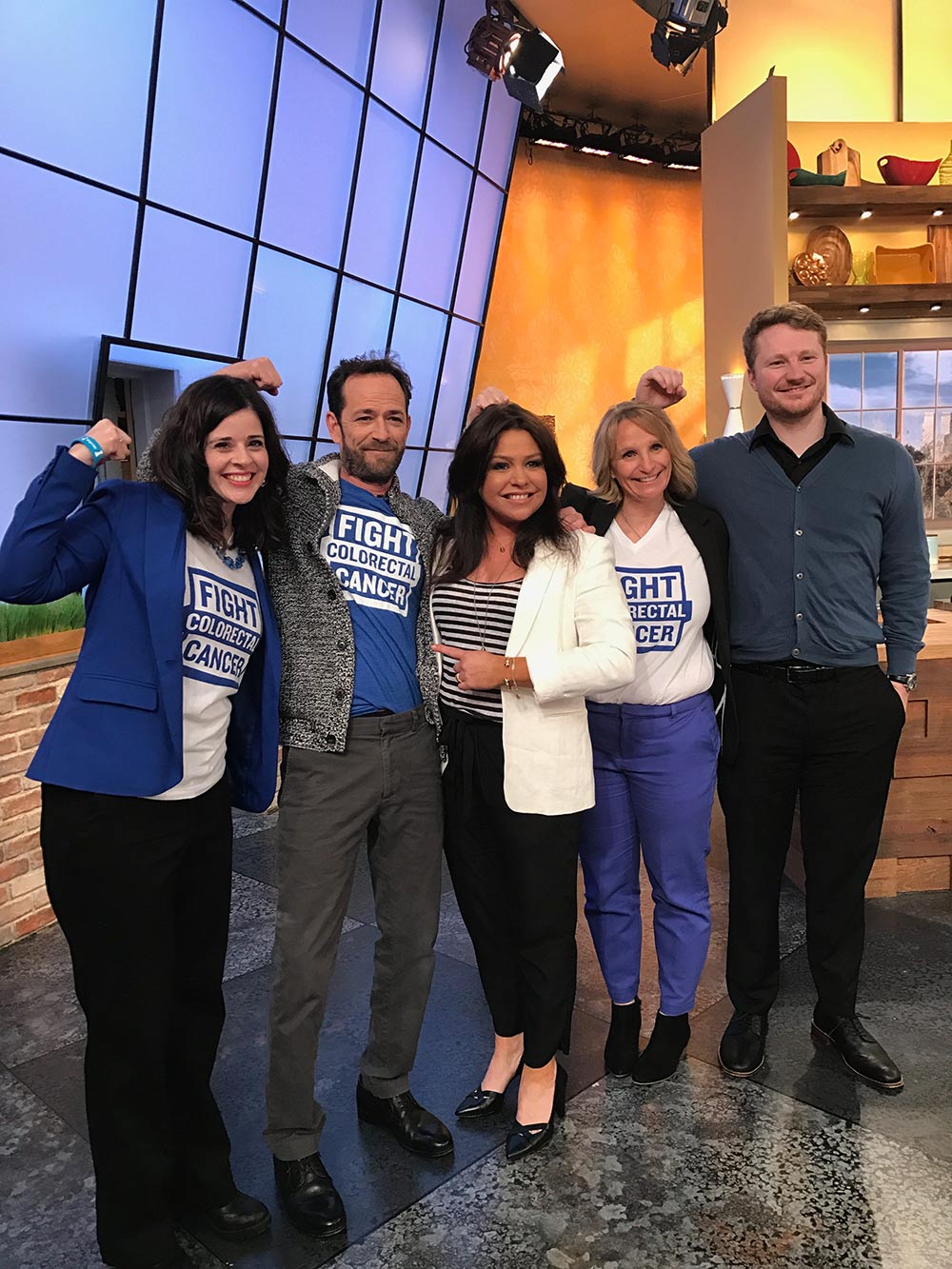 So what's behind the two cases of young adult colorectal cancer? It took us awhile to find out. Genetic testing after each of my two cancers indicated a "variant of unknown signifigance." Yet thanks to my double-dose of cancer and extremely young age, doctors began treating me like a Lynch sydnrome patient. Per the recommendations, I had a total hysterectomy and switched to yearly colonoscopies.

One day many years later, the genetic laboratory reclassified my mutation and contacted me with the news: I officially have Lynch syndrome.

But more curve balls came when neither my mom nor dad tested positive for the same gene variant. I have an inherited genetic disease, but I didn’t inherit it.

Today, I am healthy, strong and cancer-free! Through two decades of surviving cancer, I’ve learned it's a physical, emotional, mental and spiritual disease. Despite the setbacks, my faith in God has grown very strong. I'm passioante about helping other survivors tell their stories. I've also received several blessings, none more special than the adoption of our daughter Mae.

I eventually learned to embrace my body and find my voice, which I now use to encourage others— especially gals—to not be embarassed about their bodies. This freedom led to me writing my memoir which tells the full story, Blush: How I barely survived 17 (Redemption Press, 2020), as well as speaking.

I share so people will get screened. So girls will love their bodies. So survivors will tell their stories. And to inspire—even when our bodies fail us, our faith can survive.

Your faith can survive, too. Need encouragement? Sign up for Danielle's Monday Morning Survival Guide. 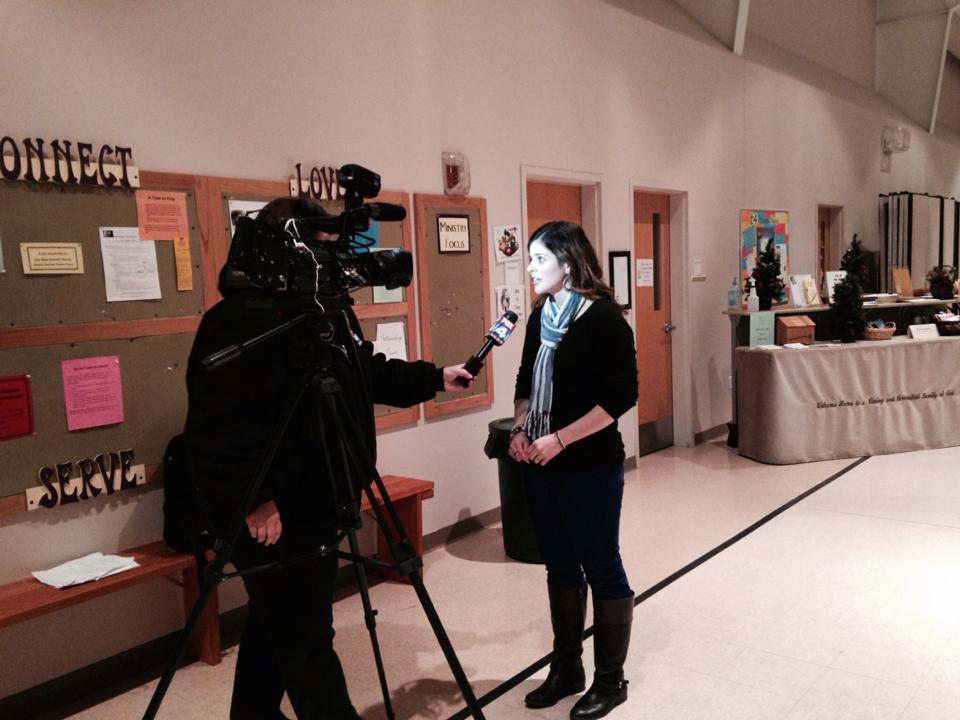