My first day of school as a mom

Chimes from my smart phone's alarm broke the silence at 6:30 a.m. The long-awaited morning arrived:  the first day of school.

Five years prior time felt like a marathon. A judge made a nine-month-old baby girl "officially" ours after six long months of post-placement adoption visits.

But on this day, time felt like a sprint. That girl grew up. Everyone was right, it goes fast.

In the same room with the same curtains that hung over a crib, an eager kindergartner sprung out of her adult-sized twin bed. I sleepily stepped into the shower, out of practice with early mornings, and threw up a few prayers of protection for my girl. Our new morning routine began.

Two days of purging and organizing closets paid off when we both dressed quickly without the stress of searching for clean underwear or both pairs of shoes. A season of nesting paid off. She chose to wear a dress with a pink top and floral bottom purchased during a pre-school shopping spree with Grandma. We brushed our teeth together.

Then we did her hair.

I was careful to build in time for this. Now, more than ever, I felt the pressure.

Luckily her childlike oblivion kept her naive about the world where hair matters - especially when white parents raise a mixed child. To keep it that way I took extra time to moisturize and smooth out her biracial curls. She requested a low bun, specifically placed not on the top of her head but down lower near the nape of her neck. She topped off her look with a Christmas bow headband.

I couldn't help but see it as a much-needed reminder:  Jesus is with her wherever she goes.

I read off a slew of texts from friends and family that wished the big girl a good first day of school. Gigi called on Facetime and we talked to everyone near her, including best friends and parents who'd also helped raise Mae over the years. With a laugh that hinted a cry could too easily come afterwards, Gigi wished her good luck at school. Ava got on the phone, also excited for her first day of kindergarten. The girls smiled at each other and waved goodbye.

I watched from behind, happy yet sad day care days were over.

We went downstairs and I made her eat scrambled eggs with veggies before she poured a slightly-sugared bowl of cereal. She scarfed it down right before grandparents came through the door.

Grammy, Papa and her great grandma, with balloons in-hand, wanted to see her off. It felt like a flash-forward to prom night, minus the corsage and handsome date (thank goodness). Daddy came home from work to get in on the fun.

We packed her Frozen lunchbox into her purple cheetah backpack that hung so low it touched the back of her knees. She wrote her name on a blank white piece of paper and I followed it up with the date and "1st day of Kindergarten" to capture the important milestone.

A photo shoot ensued in the front yard. We captured every smile and smirk.

The fire hydrant several houses down marked the bus stop. Our parade of supporters followed the bouncing, bubbly kindergartner down the street. We made friends with two other girls who soon came out of their house. Soon the big yellow bus turned the corner.

Squeaky brakes and a red stop sign signaled it was time. I followed the purple cheetah backpack across the street, careful to point out what to do. There was no need - she already knew. Without any hesitation she stood in front of the big bus stairs and stepped up to meet her bus driver. No tears. No looking back.

I watched her little head disappear through the tinted windows and assumed she found a seat. As the doors closed and the bus driver waved goodbye, stinging alligator tears sat in the corners of my eyes. My chest sank as the big yellow bus drove off with my baby on board. I had no clue where it was going next or who else it would pick up.

And I had to be OK with that. 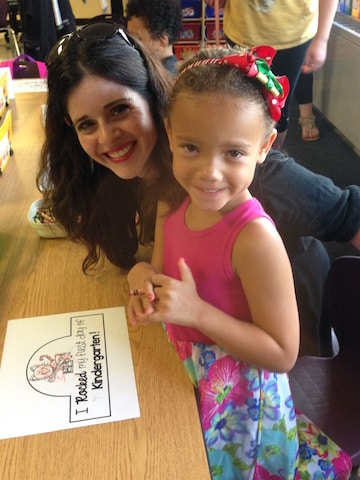 In the midst of the momentary fear and pain, time once again stood still. A marathon awaited me as I excitedly waited to see her again after school.

The precious baby that a brave birth mom trusted me to raise was gone, just like the yellow school bus that was now out of sight.

I let the tears well up but then soon fanned them away. My dad who'd also joined me across the street put his arm around my waist and mentioned the day I too once boarded a school bus. We stood there in solidarity, not as father-to-daughter but parent-to-parent.

I imagine the same jolt in my heart hit his too as he also watched his baby girl grow up just a little bit more that morning.

We walked to join the rest of the family across the street. My husband put his arm around me, knowing the tears had come. They were subsiding, emotions calming down.

Our baby was off to her next adventure. It was now our role to wait and watch her, and keep pursuing our own.

I chose to accept and embrace it, look ahead to the future.

I kept my eyes peeled all day, looking forward to seeing my bouncing kindergartner wearing a Christmas bow headband making her way back home.

2 responses to “My first day of school as a mom”