Don't you love how medical news and decisions tend to linger? It's like cutting onions or boiling eggs. Well, sort of, it's way less scrumptious at the end.

Meeting with a colorectal surgeon

I met with a new surgeon this week at KU Cancer Center and discussed my latest colonoscopy. I liked him a lot. He was smart and asked good questions.

I challenged myself to set an appointment with a new doctor to get a new opinion. This isn't easy for me - I'm loyal to my past team.

But, I'm also aware I'm high risk for cancer and getting an opinion from someone who came highly recommended (three times!) who works at an NCI-designated cancer center, isn't a bad idea.

The first meeting is always interesting, but as my husband pointed out, he "warmed up" as the appointment went on. It's an interesting "first date" for doctors and patients. But, it went well.

At one point, the surgeon even asked if I was a nurse because I could understand his lingo. (Props to Fight Colorectal Cancer for truly getting advocates up-to-speed with "doctor talk" - serving five years as the comm director came in quite handy.)

In our office visit that went way longer than I expected (in a good way), we talked about a lot of things:

I went into the appointment having processed getting the total colectomy, which I knew would result in either an ostomy or ileostomy and a colostomy bag.

He confirmed what my GI doctor said, and because I've got only 40cm of colon left from my past subtotal colectomy, I'd be looking at an ileostomy.

I was OK with that though - all of you who reached out prepared me. You helped me see a colostomy bag is not the end of the world.

He did mention people in my situation, survivors with radiation damage and/or those who need all of their colon removed, also consider the j pouch.

Thoughts about the J Pouch

I've heard of this procedure, and I've met several friends with j pouches.

As I understand, it has several pros, with one of the biggest being it's all internal, so no external colostomy bag is needed.

However, as we talked through the j pouch, I realized it's not the "surgery to end all surgeries." There are still slight cancer risks, endoscopy screenings and future surgeries involved with a j pouch should complications arise. With a j pouch I'd have a temporary ileostomy, and it would take another surgery to reverse it.

If I was getting this same news when I was diagnosed with colon cancer at age 17, or if I was 25 years old again facing my second occurrence, I might lean more toward the j pouch.

But I am almost 35 years old, I've already survived two colon cancers, three major bowel surgeries and a total hysterectomy. I'm tired of this, so it became a really easy decision I made right there in the office:

Give me the surgery that won't lead to another (as far as we can help it). Give me what it takes to remove ALL of my colorectal cancer risk.

Let's do the ileostomy.

The doctor's reply? "That's very reasonable. I'm not going to try to talk you out of it."

So, that was nice.

I also noticed both the resident and the surgeon used the word "reasonable" with me a lot - are they teaching this in medical school these days? I like it.

As we wrapped up the visit, we started talking about timelines.

I'm not in a rush to get this procedure done, and he agreed. I got a green light to enjoy the holidays. (yay!)

But, we did go ahead and form next steps for a plan. Due to my polyps, I'm looking at a 6-month window of when I need checked again. All doctors agree, it's best to not let this go on forever.

I eagerly jumped on his offer to connect me with the ostomy nurses. This is also coming from advice within the CRC community - ostomy nurses who deal with colostomy bags can become your best friends. So, I have my first "education appointment" with an ostomy nurse in January.

Then, we set a CT scan for February. He wants to take a look inside and make sure he understands the "lay of the land" (my words).

I will see the doctor again in February to discuss next steps, and I'll likely schedule surgery for next April.

This also gives me time to hit the gym next spring. Why? I hear exercise helps prepare people having colorectal cancer surgery.

In the meantime, I've also had a breast and abdominal ultrasound, as well as a skin cancer visit, which all came back clear.

Lynch syndrome is no joke guys. This is exhausting, but at least a lot of the cancers involved are preventable, or treatable if caught early.

A lot of you have been praying for me and reaching out - thank you so much. And especially to all of the ostomates who've sent special words of encouragement, thank you. 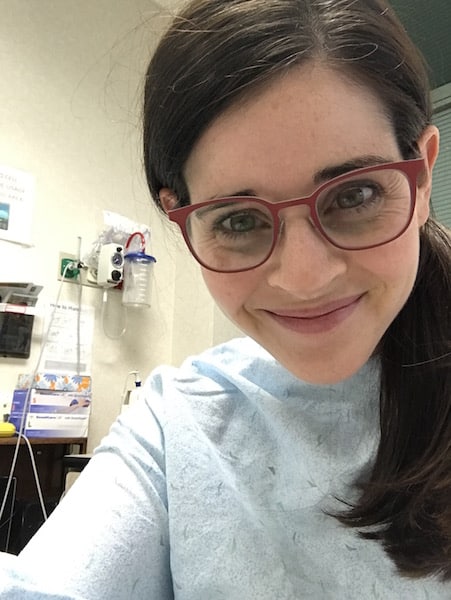